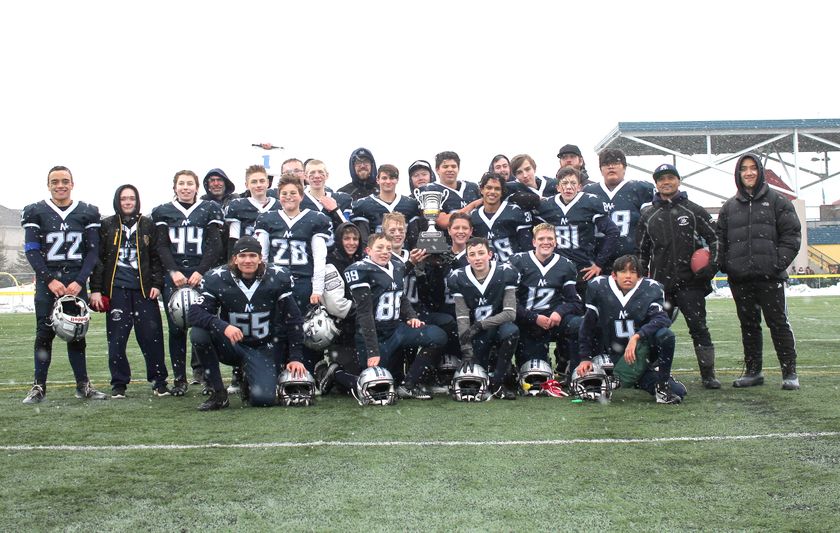 When you win a championship trophy, you want to parade it all over town.

Although, the Sherwood Park Bantam Northstars wish they hadn’t have had to make one stop after winning the Capital District Minor Football Association’s Tier 4 title on Sunday — the hospital.
Late in the second quarter of their 48-12 victory over the St. Albert Fury, Northstar Elijah Statt went down with an injury and was taken by ambulance to the hospital.
Shortly after collecting their trophy, the entire team went to check up on Statt and share the celebrations with him.
“He went in for a tackle and got jammed up a bit and suffered a fractured vertebrae in his neck,” explained Stars head coach Dylan Wright. “It was a pretty scary moment on the field for everybody involved. Elijah, his family, everybody was a bit shaken up with an injury that severe. He went to the hospital, but was up walking and ended up being released later that day, which was great news. We loaded up the bus and took the whole team to the Stollery to visit him and to take him the trophy and make sure he was OK. He was pretty upset that he wasn’t there to finish off the game and the season with everyone, but when it is something that severe you need to make sure it is looked at properly. It was scary, but it all seems to have ended up alright in the end.”

As for the game itself, the Stars were able to refocus and steam roll to the win, getting three touchdowns from Izaiah Oliveros and two apiece from Dustin Jonker and Damian Duru.
“It wasn’t our best game, but it was still a win in a championship game,” Wright said. “It was the last game we played this year and we got ourselves a championship. We have a lot to be proud of this year, especially with how few players we had. It was almost the norm for us with injuries and what have you to have fewer than 20. To win a championship in any tier, that’s got to be viewed as a huge success. When you have so few bodies to work with, you really need everybody to be on board and on the same page, and we got that from this group, week-in and week-out. When you only have 18 players for a game, one injury can alter things drastically. This group did a great job being able to adapt and keep battling no matter what we had to deal with. I’m very proud of all of the kids, as well as our coaches and volunteers.”

Wright is hopeful that their successful season will help with recruitment for next year.
“It’s not going to be easy for us, as we have a number of kids who are graduating from the program who have been three-year kids and with us for a long time,” he said. “To replace them is going to be tough. But we started our PeeWee program this year and we have some big kids coming up who look ready to make that jump. Our other returning players are going to have increased roles and they know that. There is a lot to do and we are ready to rock and roll in the off-season.”
The last championship for the Northstars came when they won the Tier 3 championship in 2016, the organization’s first title of any kind since 2000.

Manage your identity from the palm of your hand to the top of your desk.